I'm the (self-proclaimed) "Espresso Guy." I created this website to educate the home espresso making newbie and to provide recipes, tips, and troubleshooting steps for those already pulling their own espresso shots. If you're having trouble deciding what to buy, there's guides on buying beans and equipment.

Earlier this summer I was fortunate enough to visit Italy for the first time, spending about two weeks total in Venice, Florence, and Rome. Of the three cities Venice was wonderful but unfortunately quite lacking in the overall food and drink quality — including espresso — though I highly recommend visiting Venice regardless.

On the other hand, Florence and Rome have cafes serving good quality food and espresso on almost every corner. Surprisingly, even the most run down looking cafes almost always beat my expectations, particularly when it came to espresso.

Clearly, Italians care a great deal about their coffee — and it shows.

While many Italians speak at least some English they may be confused if you order “espresso.” In Italy the default way of preparing coffee is espresso, so just order a “caffè,” which means “coffee.” I found this out the hard way after getting a lot of blank stares.

If you want an espresso prepared the same way as you’d get at any American third-wave espresso cafe, order a “doppio ristretto” which is literally translated as “double tight”, but in English we’d say “double short.” If you just order a “doppio” or “double,” it’s going to be a little watery compared to what us Americans are used to.

The average cost these days for an espresso in Italy is about one euro per shot. In addition to the espresso, some places will also include a small glass of sparkling water, like many contemporary cafes in the US often do.

Oh, and one last practical matter: public bathrooms in Italy are few and far between, but I found that most cafes will let you use theirs if you order anything. That’s a tip every tourist should know, whether they like espresso or not.

No, you can’t make espresso with a phone case

Recently a Kickstarter project from Italy made headlines, the Mokase, which claims to be able to make a shot of espresso using a case for several popular smartphone models.

There’s only one small problem with this idea: it’s completely insane. Tech news site The Verge offers a skeptical take, pointing out a lack of specifics on how the device actually works.

As an espresso fan, software engineer, and longtime iPhone user, I can point out a few ways in which this project doesn’t pass the sniff test:

All that said, I’ve already booked my first visit to Italy this summer. If anyone from the Mokase team wants to reach out and provide a demonstration of their working prototype, I’m willing to test it with an open mind. But as a consumer, I have serious doubts about both this project and the general concept overall. To me, this sounds like an even more questionable version of the Juicero, but for espresso. At least I’ve heard of people trying the Juicero — that’s more than I can say for the Mokase.

Posted in Blog | Tagged crowdfunded, kickstarter, phone, pod, portable | Comments Off on No, you can’t make espresso with a phone case

Over the past week or so, headlines have been buzzing with the concept of an “espresso tonic,” a beverage made by mixing espresso with tonic water. Here are a few examples:

Daily Mail: Is this the most bizarre coffee trend yet? Now hipsters are adding TONIC WATER to their espresso

If the concept sounds familiar, you’re not alone. High end espresso bars have been offering a small glass of water — tonic, sparkling, or mineral — with espresso for at least a decade. So we’ve all been mixing “espresso tonics” for years in our own stomachs, if you think about.

Still, the idea of mixing espresso with tonic water in a cup itself isn’t exactly a new trend either. All of the above headlines come from British publications, which leads me to suspect this idea only recently made its way to the UK.

Digging a little deeper, I found an Eater article on the subject of mixing espresso with tonic water — from two years ago. Eater’s 2015 article explains that this was not a new concept at the time: “The idea of mixing tonic water and coffee is not an unfamiliar one,” with its origins in barista competitions.

What makes tonic water and espresso a good pairing in the first place? I can’t say for certain, but I can offer a conjecture. Espresso has a certain harshness to it, while tonic water is refreshing. Both have the distinct characteristic of feeling thick or heavy in the mouth, with espresso leaving behind a strong aftertaste, and the carbonation in the tonic water helping cleanse the palette.

Alternately, it’s a similar appeal as an Americano. The addition of water draws out the fast punch of an espresso into a longer affair, while still retaining the refined nature of a shot of espresso. Sort of like a fancy cocktail, but with espresso instead of alcohol.

I tried espresso made by “robots” from Cafe-X 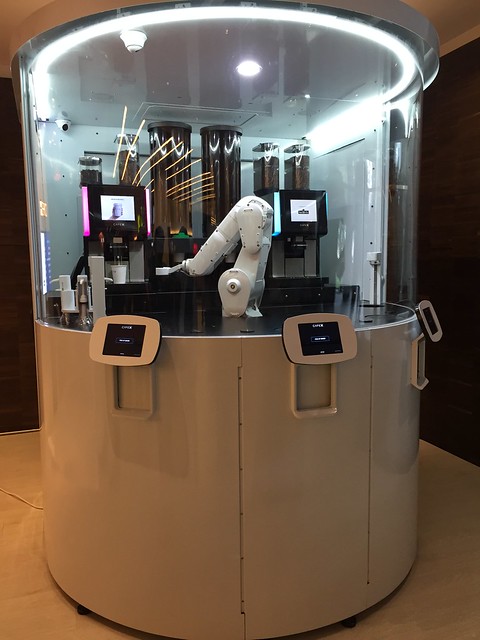 Vending machines capable of making cappuccinos, lattes, and other espresso beverages are nothing new. You may have used one while staying up late at college, or struggling to keep your eyes open during break on jury duty. The espresso they make tends to be mediocre, but it’s better than nothing.

But that’s changing. A startup called Cafe-X has taken the espresso vending machine concept and given it a high tech twist. Since they had one up and running in San Francisco, where I live, I figured I should head over and try it myself.

The machine sits in a corner of the ground floor of the Metreon, a mall complex that also features a Target and a movie theater. A crowd had formed around the machine, which features a big window in the front so you can watch the high-tech “magic” at work. Two Cafe-X employees where on site to answer questions and help customers punch in orders.

A pair of high-end superautomatic machines make espresso drinks, and a robot arm shuffles paper cups between the machines, pumps for syrup, and pick up windows. These machines differ from your standard espresso vending machine in a couple of important ways.

First, the robot arm and multiple espresso machines mean that it can make more than one drink at a time. While it does take up more space than a traditional espresso vending machine, it also means that orders can be streamlined for efficiency to reduce line speed. The completed drinks are placed in a queue by the robot arm until you punch your order code into the tablet, at which time the arm moves your cup into the pickup area.

Second, Cafe-X has focused on quality. They’ve partnered with a number of high end coffee roasters to tweak the machines variable’s to make the best possible espresso out of the roaster’s beans.

I suspect the espresso machines themselves are off-the-shelf products, though their branding had been covered up or removed so I’m not sure which model they’re using. It did make a perfectly good cappuccino, although the foam didn’t have the latte art you’d expect at a good cafe.

But there are reasons to be skeptical that Cafe-X’s machine could truly work without human supervision. One issue that I immediately noticed was the machine sits on a raised platform. Someone in a wheelchair would not be able to get to their coffee without help. I imagine that could be addressed through a new design.

Another issue is that the machine isn’t aware of its surroundings by any means. During my visit, some kind of enormous cockroach wandered over. One of the Cafe-X employees scrambled to get the cockroach into a cup and away from the machine. Vending machines have similar problems, of course. The employee joked to me that he would have prefered if the robot could have dealt with the problem since it wouldn’t have been as afraid of the insect as he was.

So while Cafe-X isn’t the perfect replacement for a cafe, it could be a replacement for your traditional espresso vending machine. While the robot arm is impressive I do have to wonder if it’s truly necessary. In an office setting for example, I don’t think it would be too onerous to ask the employees to place their own cups and pump their own syrups. In a setting like that the only advantage is that Cafe-X dials in the right settings to the machine and maintains them, but it hardly justifies the bulky machine.

Is Cafe-X just a gimmick? Right now, I think the answer is clearly yes. The footprint of the thing is far larger than your average vending machine, and in many situations there’s no benefit to the robot arm. But that doesn’t mean there’s no future in espresso made by robots, it just means that it isn’t here yet. Of course, the next model from Cafe-X could easily prove me wrong.

Posted in Blog | Tagged cafex, robots, vendingmachines | Comments Off on I tried espresso made by “robots” from Cafe-X

Caffeine content of espresso vs. cold brew vs. drip coffee

Last month CNET broke down the caffeine content of espresso, cold brew, and drip coffee. The timing of the article couldn’t be worse — interest in cold brew coffee picks up in the summer and dies out in the fall. But there’s still some interesting points worth considering.

First, the amount of caffeine you consume depends both on the brewing method and on how much you consume. Generally for espresso that’s only a shot or two, but varies a little more with drip coffee. Second, cold brew is typically made as a concentrate and diluted with some water, though the amount of dilution often varies significantly.

What’s a little surprising here though is just how much caffeine is in cold brew coffee compared to espresso and drip. I’m no chemist, but I’d assume this is related to both the longer steep time and higher coffee to water ratio of cold brew.

If you’ve never tried cold brew coffee I’d definitely encourage you to do so, though maybe wait until hotter weather makes it more palatable. It’s simple enough that anyone with a coffee grinder can make it at home. (And yes, once again I swear I’ll add cold brew techniques to this website someday.) Compared to drip coffee, cold brew has a surprisingly “heavy” texture that’s similar to mineral water, but otherwise smells similar to drip coffee.

Despite CNET’s findings, I’ve always found the caffeine rush from cold brew to be fairly mellow. But maybe my body is different than yours — what do you think? I’d suggest testing this one out on your own.